We arrived at Portrush bang on time, without a hitch. Not having to go through customs at George Best Belfast City Airport after our domestic flight, we passed through so quickly that we were on the bus before our plane was officially due to land! This gave us more time for lunch in the city centre before catching our onward train to the seaside resort on the North Antrim coast. We got a family travel ticket for just £17 – valid for unlimited travel for a day on bus or train in Northern Ireland. I thought this was excellent value as I’ve often paid more for just an airport to city transfer.

Portrush has a reputation as a bit of a bucket and spade resort, with sandy beaches, a funfair, amusement arcades and the like. We had chosen it due to its close proximity and public transport links to some of the most picturesque locations on the Northern Ireland coast – the abandoned village and clifftop castle of Dunluce, Carrick-a-Rede Island and the Giant’s Causeway. More of them in later blogs. The Causeway Coast Rambler bus service runs along a beautiful section of the Irish coast, connecting the town to the little port of Ballycastle and all places of interest in between. Portrush is also the only town in the vicinity with a railway station.

The town reminded me of the South Wales resort of Porthcawl, not far from where I live. On one side of town is a beach, backed by a funfair next to a harbour. On the other side is another beach with a more rural aspect looking east to sand dunes and the Royal Porthcawl….er….Royal Portrush Golf Club, soon to host The Open. This beach is 2 miles long, stretching almost to Dunluce. Our Airbnb apartment overlooked it and we had fantastic views towards the rocky outcrop beyond the Giant’s Causeway.

Portrush is a mixture of elegant Victorian terraces and ones which have seen better days. There has been some regeneration, with a square providing pleasant open space in front of the station and the legendary Barry’s Funfair. Attractive seafront promenades have been developed along the East and West Strands. 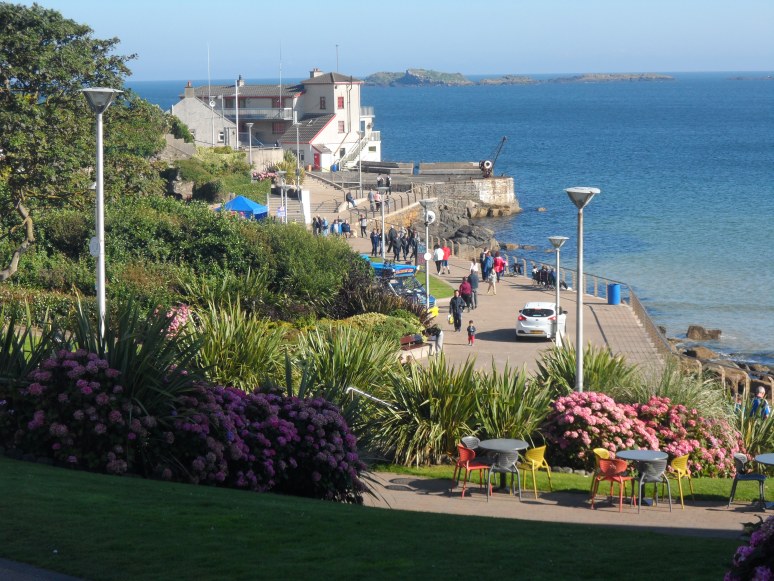 The funfair was a hit with my daughter F, who was scared witless on the Ghost Train and thoroughly enjoyed Turtle Splash.

Having the beach just outside our door was really good. Almost as soon as we arrived, we were running down the sand and into the sea, alongside the surfers. My wife S stayed dry on the beach, although she did say it had been drizzling when we emerged from the surf, but we hadn’t noticed. Being on the west of the British Isles, the water was not too cold – honest!

A stroll up the East Strand led to the Portrush Coastal Zone, an informative free exhibition on the geology, people’s and natural history of the Causeway Coast. This included exhibits such as traditional fishing boats and bones of whales that had been found locally. Videos and information boards provided further detail.

An annual air show takes place in the town attracting up to 200,000 visitors. It started the day we were leaving! While missing most of it, I did have a look around some of the exhibits that had been set up in the car park outside our apartment. These included a spitfire, a couple of military helicopters and a plane so old it looked like it had bicycle wheels to me! S and F aren’t great aeroplane enthusiasts, so weren’t too disappointed to be leaving as all the action was starting.

Although perhaps less genteel than neighbouring Portstewart, Portrush proved a good place to stay for our family break, with more child friendly attractions. Located on a peninsula with great views west to Donegal and east along the Causeway Coast, it was an excellent base for exploring further afield.

Portrush is on the North Antrim coast of Northern Ireland, otherwise known as the Causeway Coast

The town is on the A2 coastal road that runs between Londonderry (aka Derry) and Belfast. It has a railway station and connections to mainline services are available at Coleraine. The nearest airport is Derry (27 miles) although more comprehensive services are available to Belfast International (47 miles) and George Best Belfast City (62 miles).  Rail connections from these airports are at Londonderry, Antrim and Belfast respectively

We stayed at an apartment in Sand Dune Terrace, booked through Airbnb. For other accommodation options, click here

6 thoughts on “The Northern Irish Seaside”

Check back for updates